GBM was founded in 1969 by far-sighted faith leaders in response to the challenges posed by the Civil Rights movement’s transformative moment in Birmingham, Alabama, the South and the nation. Black and white, women and men, GBM’s founders sought to overcome the weight of racial oppression so severe that Birmingham was once called the “Johannesburg of the South” and “Bombingham.”

Three denominations launched new efforts to respond more effectively to people in need and build a community of peace and justice in Birmingham. These three efforts, begun by the United Methodist Church, the Episcopal Church and the United Presbyterian Church (now Presbyterian Church USA), merged in 1971 and set the pattern for GBM’s work as a shared interfaith ministry. In the years since, 17 more faith communities have joined in our work, representing Christianity, Judaism and Islam, making GBM a multifaith and multicultural organization.

GBM is an expression of the commitment to social justice and to mercy and compassion for all, held in common as core beliefs by all of these diverse faith communities. The faith and generosity of these communities, along with the support of many other groups and individuals, makes it possible for GBM to continue responding to poverty and building meaningful community relationships.

GBM’s volunteers and staff have assisted thousands of Birmingham-area residents by providing for countless immediate needs, such as food and clothing or financial assistance, covering a wide range of expenses including rent, power, gas, water, medicine, and transportation.

Meanwhile, GBM has worked consistently on the challenges of changing systems on local, state, and national levels.  We work to make the social networks of the community open and fair to all, especially to those with little economic and social power. At the heart of this commitment is a belief in human dignity, which connects us all to one another, regardless of our economic or social position.

Some of GBM’s past accomplishments include preventing the destruction of 900 units of public housing targeted by highway construction; stopping the sale of a local non-profit hospital to a for-profit healthcare giant; establishing Alabama’s first statewide interfaith social justice organization; creating the Birmingham Center for Affordable Housing; building Birmingham’s first non-sectarian homeless shelter for men (you don’t have to pray to stay out of the cold) and Birmingham’s first homeless shelter for women; winning the first bond issue initiated by citizens and dedicated to affordable housing in the City of Birmingham; and stopping the construction of an environmentally damaging sewer system funded by inner-city rate-payers for the benefit of suburban developers. 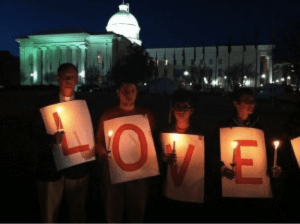 A Seedbed for New Organizations

GBM works in partnership whenever possible to respond to emerging needs. At times, there is a vacuum where no organization exists to meet an emerging need, and a new entity is created. GBM has created or helped incubate over twenty local organizations and affiliates including: