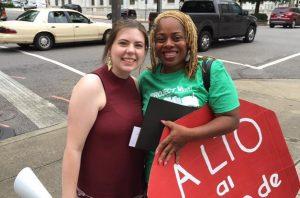 As I come to my half-way point of my summer internship, I have been reflecting on the personal tone of advocacy here at GBM. A moment when I experienced an interesting side of advocacy was at a meeting for Ban the Box. A diverse group of individuals met at The Abbey on a Thursday night to discuss the importance of Banning the Box, opening up employment opportunities to formerly incarcerated individuals, and how they could help. Originally, I was attending as an intern to photograph the gathering and become more exposed to the issue. Ban the Box is not an issue in which I have a personal interest in, so this meeting became far more of a learning experience than I expected.

If advocacy is defined as “public support for or recommendation of a particular cause or policy,” then we must decide what the words within this definition mean in order to interpret it. The word I find myself focusing on the most is “public.” “Public” may insinuate a large scale proclamation through a megaphone or on the steps of a legislative building. It insinuates a wide reach of audience and impact. It is not to say that these conditions do not equal advocacy, but the word “public” may create unnecessary exclusion. “Public,” no matter how small-scale, has potential for change, as opposed to “private” wherein the thought of change never escapes one’s mind, and therefore no change comes from. “Cause or policy” may also be too restrictive. Advocacy may come with an ultimate goal of policy change, but what is policy without societal awareness and shift? This definition comes with a connotation of legislation, but advocacy comes in many forms and layers. Advocacy may start in a community; in a conversation over coffee, in a correction of micro-aggression, in a lesson of self-worth. The small moments in everyday life build and build into an eventual paradigm shift. These are the moments that may change minds and sympathy toward policy change and then make said policy valid and effective.

In the days before the Ban the Box meeting, I created Facebook posts, prepared a design for an internet campaign, and anticipated the atmosphere of the meeting. New experiences, no matter how small, cause me to worry about small details. No matter how unimportant, my anxiety will always demand it. I spent the day wondering what the room would look like, how we would be seated, and how the information would be presented. My mind was wrong. I expected a large crowd with a few leaders informing people on methods of Banning the Box. What I got was a small gathering on couches with nearly equal input from every single person present. Another coworker and I called around 100 individuals informing them of this meeting and around ten people showed up. I was disappointed until I heard several people talk about what a great turnout it was; I couldn’t understand how ten people could really make an impact. As the meeting progressed I became more and more impressed and felt even more unqualified to speak on the issue. I expected to hide in the corner, perform my intern duties, and go home and upload photos. Hearing people talk about the progress that has been made and the progress they plan to make made me realize I may actually have something to offer. It took a Samford student volunteering to talk to campus leaders to make me realize I could do the same at Birmingham-Southern. I know far less about the issue but I know I have a work group around me to guide me and push me to at least attempt to Ban the Box at BSC. What struck me the most was hearing such a variety of perspectives and methods to Ban the Box within different communities. There were people who had no personal investment that just wanted to use their privilege and abilities to help, people who worked in related fields, those whose family members could not find employment, and those who were struggling with employment themselves. A coworker, who i had never seen talk at length about issues before, spoke about her frustrations for her grandson and the underlying racism that makes it that much harder for him to turn his life around. A lawyer suggested talking points that would better appeal to a legislative figure. A pastor explained insurance issues that occur when the box is omitted from an application. Another coworker shared her struggles and her success story after re-entry. A man talked about his access to journalists in order to spread awareness of the issue. Not only do these people meet to strategize and influence policy change, they spend their days talking to people, sharing their stories, uplifting those who are suffering because of employment restrictions, and educating those with bias that lack understanding of former felons. These small day-to-day interactions add up to changed perspectives that can also be used to push Ban the Box forward. It is one thing to approach legislators and tell them the economic benefits of Banning the Box, but it is vital to the movement to work against the social stigmas that affect the formerly incarcerated. Advocacy can happen in rallies and meetings and protests and at breakfast. Knowing this, I realized that ten people can turn into twenty until Banning the Box becomes a household conversation and the box is banned nation-wide.

In the wake of mass violence, social media has become a concoction of hashtags, actionless prayers, and indifference. Many people may say to stop tweeting and get out and do something. While this is a valid point, the potential impact that a social media post may make on anyone who views it can turn into something bigger. It is important to be angry and demand legislative change, but there are so many people that are unaware of the effect of their inherent and learned biases. It may be impossible to change an older generation of racists’ minds, but there are plenty of impressionable minds that need to be reached and exposed to acceptance. While “getting up and doing something” may be preferable, calling out social issues on a more personal level is also important and valuable. Change is an ongoing conversation. There may be an ideal type of advocacy, but neither method is inherently wrong or worthless.

This meeting, along with the conversations I hear throughout GBM every day, has made me realize different forms of strength and advocacy. Change is not always loud and fast, but a quiet rumble of dominos. I hope to use this learning to better evaluate and direct my conversations in advocacy-based settings as well as everyday life. It has taught me the value of words and actions and how to make them more powerful and to try to be present at as many gatherings and meetings as possible, because learning may be unexpected but it is necessary. As the next Ban the Box meeting happens this week, I hope that I can be even more receptive and useful.