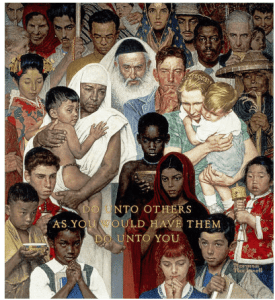 On the wall in my office is a print by Norman Rockwell that has become known as the Golden Rule, “Do unto others as you would have them do unto you.”  It is common to all religions, though expressed differently.  Here are a few examples:

Judaism – You shall not take vengeance or bear a grudge against your kinsfolk. Love your neighbor as yourself: I am the LORD.

Islam – That which you want for yourself, seek for mankind.

Christianity – Do to others what you want them to do to you. This is the meaning of the law of Moses and the teaching of the prophets.

The Golden Rule is a fundamental core principle for most people of good will and faith.  It is one of those lessons most of us (hopefully) learned as children, such as in Robert Fulghum book, “All I Really Need to Know I Learned in Kindergarten.”  Such core principles instilled in us, such as “Put things back where you found them; wash your hands; clean up your own mess; don’t hit people; share everything and play fair”.

Share everything and playing fair are certainly core principles of the Golden Rule. It is not fair that people seeking asylum on our southern borders are treated differently and more harshly as others seeking asylum by other ways.

It is true, our immigration system is in desperate need of reform.  The current system has created the presence of millions of undocumented immigrants/refugees living in the shadows of our society often leading to their exploitation.  They are separated from their families, they die in the desert southwest. The system we now have does not reflect our religious traditions and the tradition of hospitality which has defined the United States of America.  The U.S. is a nation of immigrants.   With the exception of those of Native or African descent, the U.S. has been continually reshaped by groups of people bringing diverse cultures, perspectives and resources.  Like most of the ancestors of those immigrant groups, most immigrants today migrate either due to economic necessity or to flee danger or persecution.  Yet, with grateful hearts, they make their own way in trying to live the American Dream.

Our economy today depends on the hard work of immigrant workers.  They contribute greatly to the economic well-being of our communities and they pay taxes for public services for which they do not benefit.  Immigrants pay local taxes through work, purchases, and housing, as well as direct federal taxes.  Young immigrant workers contribute to Social Security through payroll taxes.  In fact, according to a Social Security Administration spokesperson in 2006: between 1990-1998, $20 billion dollars were paid into a “suspense file” where social security numbers do not match up with workers’ names – that is to say, paid by undocumented workers, who are paying into the system but will not be able to collect benefits.  In 2003 alone, $7.1 billion was paid into this suspense file.

According to the guiding principles of most faith traditions, all human beings have value and are part of God’s good creation.  All our faith traditions acknowledge the command of God to welcome and show hospitality to the stranger sojourning among us.  Therefore, we must not bow down to harsh and unjust laws and policies that compromise the principles and core values of our faith traditions.

As people of faith and good will, we must educate ourselves and our communities about the realities of immigrants and immigration, working to dispel myths and stereotypes about people who are here as legal immigrants and as undocumented people.  We must speak out against injustices, exploitation and hostility directed toward immigrants, documented or undocumented. And we must promote the respect and dignity of every human being.  It is the moral thing to do.

Robert Fulghum says of his book,” All I Really Need to Know I Learned in Kindergarten”,  “Everything you need to know is in there somewhere. The Golden Rule and love and basic sanitation. Take any of those items and extrapolate it into sophisticated adult terms and apply it to your family life or your work or your government or your world and it holds true and clear and firm.”

So let us get back to basics.  Let us do unto others as we would have them do unto us.  Let us hold fast to our fundamental core principles as people of good will and faith by sharing everything and playing fair regarding refugees and immigrants.