Elvis was in the building. 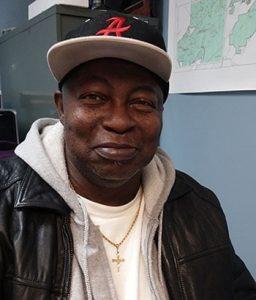 Recently, Elvis was in the building at Greater Birmingham Ministries.

He goes by the name Elvis Presley, and though a criminal record has haunted him for over 20 years, his faith and courage keep him optimistic and incredibly cheerful. Elvis acknowledges he knew he was making a mistake when he committed that long-ago crime, but had no idea the consequences that his conviction would have on his life. Alabama state law prevents persons with felony records from receiving food or housing assistance – and of course, many cannot vote.

“When I was a child,” Elvis paraphrases I Corinthians from the Christian scriptures, “I behaved as a child, but I have put those childish things behind me.” Elvis has cultivated an ear for the voice of the divine – he listens carefully for God’s instructions to direct his steps, and is often directed to help others. Elvis recently lost his long-term partner to lung cancer; and though he still mourns her, crying easily as he recalls her passing, he is now finding ways to serve friends and neighbors.

Money is tight – three years ago, Elvis suffered two heart attacks and underwent open heart surgery, and now has a pacemaker. A thick scar runs the length of his torso, and two smaller scars on either side of the longer one give the appearance of a cross upon his body. “God put this cross on me – no cross, no crown!” says Elvis, proud of what he has overcome.

Elvis recognizes that, with a heart condition, he will need to eat healthy, fresh food and avoid salty, prepackaged foods; but he knows that healthier food is hard to afford when you’re on a budget, and not being able to get food stamps makes it even harder. Getting groceries at GBM today made a big difference in his life.

You can help GBM’s mission by donating to the food pantry today. Hunger has no season – food donations are needed year-round!