Fight to Expand Medicaid- A Testimony From GBM’s Moral Revival 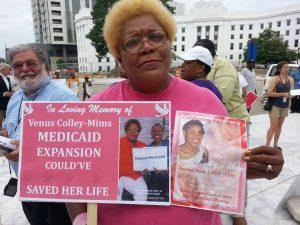 My name is Callie Greer. Let me tell you about my daughter. Venus started her journey almost 14 months before she was diagnosed with Stage-4 breast cancer. She was unemployed and her husband worked only part-time. Having no primary care doctor and no medical insurance, Venus visited the ER in Montgomery, AL so many times that our family lost count; but I can say it was at least 15 times without exaggerating. She knew something was wrong. On one of her final visits to the ER, the doctor walked in the room and asked, “What’s that smell in here?” Venus replied, “It’s my breast!” Her breast was literally rotting away from cancer. She was finally sent to the Cancer Center for a radical mastectomy and started chemo and radiation, which helped for a few months. But in 2012 we learned that the cancer had returned and had spread throughout her body.

Venus had to wait to be approved for every medical procedure she received and was waiting for approval for a CAT Scan when she came to my house complaining of a headache that had caused her not to see well. We rushed her to the ER again and Venus lapsed into a coma. It took that episode for Venus to finally get her long-awaited CAT Scan! The cancer had spread to her brain and she had 2 large tumors in her head – one had ruptured and she was brain dead. The following day, our family gathered for our last time with Venus and we disconnected her from the machine that was breathing for her.

A Statement from the Poor People’s Campaign

We Cried Power – A Documentary by Dara Kell

A Statement from the Poor People’s Campaign

We Cried Power – A Documentary by Dara Kell