It’s Called Redistricting – And It Matters! 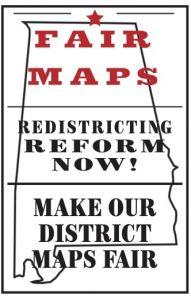 It’s called redistricting. Based upon the U.S. Constitution, it normally happens every 10 years, following the Census, so that equal representation in our country can be sustained.

State legislatures are charged with this enormous responsibility and sometimes greed gets in the way. In 2012, Alabama’s redistricting was so unfair it caught the attention of our majority conservative U.S. Supreme Court who told the Alabama Legislature to go back to the drawing board and do it right.

So far, the majority in the Legislature has failed. They have tweaked and manipulated precincts, but they have failed to maximize the mandated “wholeness of counties” in their plan.

This time let’s be active in stopping aggravation without representation!

Call your Jefferson County Legislators and Sen. Jabo Waggoner: To restore some fairness, reduce the number of nonresident incumbents to 1, resulting in 8 white and 8 black members of the Jefferson County delegation.