Just Before Our Chains Fell Off 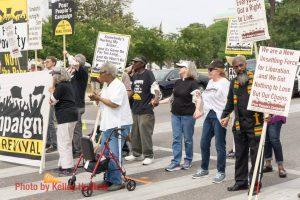 From my perspective in a jail cell as a moral witness, I recognized a dimension of our direct action that I had not anticipated, in part because I’d assumed we would not be placed in “the general jail population” if we were jailed. But as it turned out, the three women who were arrested for our nonviolent act of civil disobedience were placed in the women’s cellblock for about three hours after the intake process, and I would like others who might find themselves in that situation to realize the opportunity their presence in the jail affords them to engage their cellmates in the Poor People’s Campaign.

When Wynne, Christine, and I first entered the women’s cellblock, most of the other women seemed indifferent to us. One woman directed us to the only cell that had vacant bunks and told us where to put our bedding. A couple more gradually shared other information. We were all a bit wary of one another, and the cellblock was loud and raucous most of the time. But some grew curious enough to ask us questions. When we told them about the Poor People’s Campaign, they seemed uplifted, incredulous that we were in jail intentionally. We didn’t express it in these terms, but they realized we committed our crime for them. I think one woman actually said, “You did this for us.” We explained how they could learn more about the campaign and that they, too, could be a part of a movement for the poor and all who need justice. I don’t want to exaggerate as we preachers are tempted to do sermonically. Only a handful seemed interested and we didn’t really engage much until the end, but when we finally were taken from the cell block to be released, several called out to thank us and wish us well. It was an amazing moment. I could only call back to them, “God bless you! God is with you!”

Later it seemed to me as if Wynne, Christine, and I had been like Paul and Silas in jail sharing the good news that the other prisoners were glad to hear — just before our chains fell off. We’d been gospel bearers to people who needed to hear about the Poor People’s Campaign and the hope it holds and the way it honors their lives and lifts up their needs. Maybe these women would not have heard this gospel if “Paul and Silas” and Wynn and Christine and Ellen hadn’t been bound in jail.

We have an opportunity to share the jail cells with others who might join this great campaign. We can share with them the hope it offers. What happens on the capitol steps and in the streets needs to be carried forward into the jails, and I hadn’t considered that facet of our movement before Monday night. Our fellow prisoners aren’t the background setting for our direct action; they are potential activists in the movement.