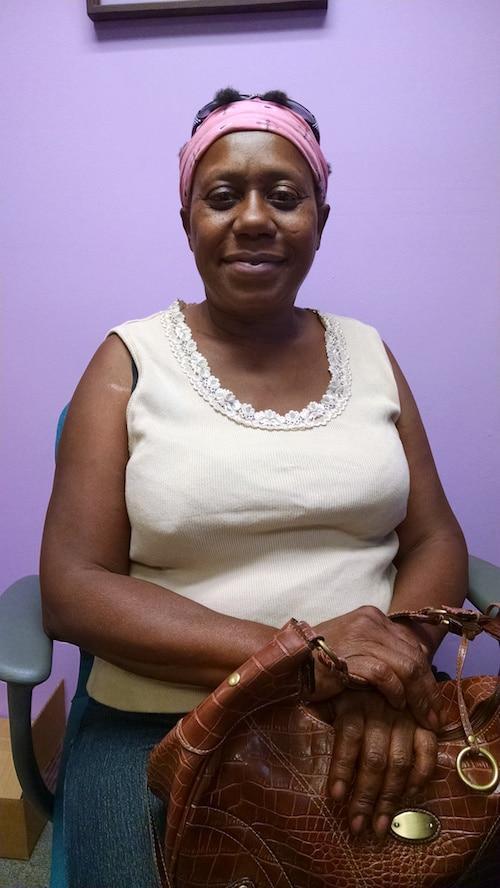 Mrs. Simmons has three grown-up children and thirteen grandchildren. She considers her kids miracles, because she was shot in the side when she was ten years old. Luckily, she survived, and after several surgeries she fully recovered. “I know there is a God somewhere,” she says.

Despite her strong belief in God and obvious resilience, Mrs. Simmons occasionally struggles with her faith. “I just wonder if God can sort me out of all the people in the world,” she says. She continues to pray and search for the same faith she had as a young child.

Recently, her daughter moved back in with her because her utilities were cut off. Now, along with Mr. Simmons and her daughter’s six children, they all live together in a two bedroom apartment. Space is limited and money is tight.

Additionally, her husband has also been unable to find a job for quite a while. She loves having her children and grandchildren around her all the time, but things have not been easy on the family.

Something that Mrs. Simmons really struggles with is not being able to do everything she wants to for her grandchildren. She cannot take them shopping and buy them all the toys they want. She doesn’t feel like she can do what a grandmother is “supposed” to do, because she cannot spoil them. Instead, she is doing the best she can to make sure they have enough food.

Although Mrs. Simmons is struggling right now and sees her daughter struggling, she doesn’t want to let that get her down. “I don’t want to sit here and cry,” she says with a smile, “I really can’t complain.”

Mrs. Simmons knows that God will see her daughter’s struggle and lift them up. In the meantime, thanks to your generous support, they are able to come to GBM and receive assistance with groceries.