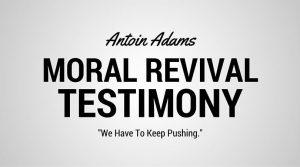 My name is Antoin Adams. I am 23 years old and live in Birmingham, Alabama. I work at KFC, and I make just $7.25 an hour, which comes out to a little more than $10,000 a year. I’ve also worked at Wal-Mart, and have never made more than $15 in my years of working. I want to tell you my story because there are thousands of us in Birmingham and across Alabama that are working hard but can hardly make ends meet. We need you to stand with us.

I work hard, way too hard for $7.25. These wages have kept me from going forward, kept me stuck always making a choice, every week, about what I’m going to take care of and what I can’t. The cost of living has constantly been going up, but my wages haven’t. I rely on a car for transportation, but I’m always worried it’s going to break down, or I won’t even have enough for gas just to get to work. Am I going to get this broken part fixed, and then just pray that my gas lasts? I don’t have benefits and must pay for medical treatment out-of-pocket. I have chronic asthma and regularly need to go to the hospital for breathing treatments.

I can’t afford these and other basic living expenses without government assistance. Until last month, I was on food stamps and am still on section 8. It’s not fair that I work and have to depend on public assistance for basic needs. These fast food companies make billions- but you wouldn’t know it by seeing how my coworkers and I live. It’s a sin that we make so much money for them but hardly see the fruits of our labor.

When I heard about the Fight for $15, I knew I wanted to be a part of it. I protested, I went to rallies, I raised my voice and brought other people, friends into the movement. I knew if we united and got together, we could win. People told me I was crazy, that it couldn’t happen, but I fought for it anyway. We got a lot of folks’ attention by taking action, by protesting, by standing together.

When I heard we won an increase in the minimum wage, I was happy. I hoped I could start to afford the basics- more regular food and things I need for the house. Higher wages would have helped me out a lot. I could have gone to school, taken computer technician courses that I never would have been able to afford on just $7.25. But now that the state has taken that raise away, I probably won’t be able to.

Hearing that the legislature that took our away Birmingham’s minimum wage increase, with a predominately black population- and that all the folks that voted against our raise were White legislators, I hate that race is part of the issue. That it sounds like we might have been denied our rights because of the color of our skin. I hate to think that people would be motivated by that to take our raise away, that race should be a part of this issue. We work too hard to be denied. We have to keep pushing until we win our raises. We need you, people of faith and conscience, Black, White, Brown, and everyone, to join us in this moral movement to win our raises, and bring victory for poor and working people.