Welcome to our new Community Organizers, Amanda Cherry and Majadi Baruti! We are thrilled to have them join GBM’s work with the #StandAsOne Coalition, the Birmingham Islamic Society and the entire community! 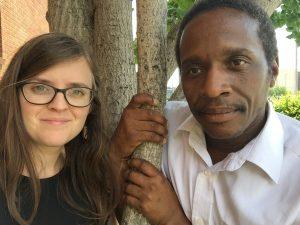 “There is a higher law than the law of government. That’s the law of conscience.”  Kwame Ture

Since the age of 16 growing up in Chicago, Illinois, Majadi Baruti has been a part of some form of Civic Engagement, Human and Civil Rights Work. He has engaged ideas as diverse as Human Rights Violations against the Marginalized, Voter Registration Drives, Reparations for African Diasporic Peoples, and Anti-Domestic Violence work. He is a former Radio Show Producer and Broadcast Journalist with WRBP/WGFT Youngstown, Ohio and has produced and co-hosted a Podcast with his partner Susan Diane Mitchell.

Mr. Baruti is a Poet, Organizer, Public Speaker and Workshop Facilitator. He has engaged training with Highlander Research and Education Center in the field of Popular Education and is proficient in Asset Based Community Development. He is a strong advocate for the New Social Economy.

Currently he is Community Engagement Director with the non-profit, Dynamite Hill-Smithfield Community Land Trust.  Mr. Baruti has served 2+ years as an AmeriCorps Member prior to joining Greater Birmingham Ministries as a Community Organizer with the Stand As One Coalition and CAIR-AL.

In his free time he enjoys life as an Urban Farmer at Ua Mer Urban Farms, he also enjoys Jazz, Hip Hop and has his love of Blues as Great Grandson of the late Delta Blues Singer Johnny Shines.”

Amanda Cherry calls a lot of places “home,” including Louisville, Boston, and Mexico City, and she is excited to be returning “home” to Birmingham to work at GBM. Amanda speaks English and Spanish and has experience working with im/migrants and refugees in a variety of contexts.

She has fought for immigrant rights in Alabama, organized clergy to support the Black Lives Matter movement in Ferguson, and stood alongside deportees in Mexico City to protest the unjust immigration policies of the United States. Amanda is looking forward to getting reacquainted with Birmingham and partnering with the community for change.