Without DACA, none of this could have been possible by Caren Tinajero 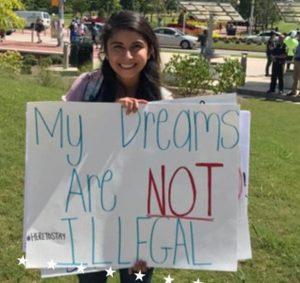 My journey started when my parents decided to move from Mexico City to Calera, Alabama. It wasn’t easy crossing the border as some of you may have pictured it. It took my family and me about a month just to cross the border and it wasn’t cheap either. I’m not going to give the details on how we survived in the desert for a week, then getting caught, trying again for the second time, and being in the desert again for almost 3 weeks. We arrived at our destination, the place that has been my home since I was 6, on August 28, 2004.

Starting school at a place where I was the “new weird student who talked differently” wasn’t easy either. I remember begging my mom to not make me go to school because I got bullied for not being like the other students. I wasn’t able to go to field trips like my classmates because for one, no one in my family knew English and could not translate all the papers that were giving to me, and two, because my parents were working hard already to pay bills I didn’t want them to pay for a field trip that could cause us to be behind on paying the bills. So, asking for new shoes or clothes was off limits unless we needed it and was from Walmart or the thrift store.

I didn’t even know what being an “illegal immigrant” really meant to me until high school. (Eventually I found out that we don’t call ourselves illegals but undocumented)

During my freshman year in high school my goal was to maintain a 4.0 GPA in order to get scholarships for college and be able to take Honor classes. At the end of my freshman year I had reached it and I was able to get into Honors Geometry. At this point I did not know that a 9-digit number prevented me from being able to attend college.

Sophomore year was right around the corner and it had not crossed my mind was that sophomore year is when everyone starts turning 15 and takes Drivers E.D, and here is where being an undocumented immigrant started to affect me. I couldn’t go get my permit to be able to drive in Drivers E.D. because I didn’t have a number to define me: a social security number. Without a permit to drive I was going to fail the class. I asked to one of the counselors at my school if I could please get taken out of this class for a personal reason. When I was taken out of Drivers E.D. many of my classmates questioned me and made comments about my “illegal” status.

All I could do was walk away because hey that’s what I was, but guess what? I didn’t make that choice.

During my sophomore year, I realized that I was not going to be able to attend college if my immigration status didn’t change. I felt all my dreams of going to college and all my hard work on being in the top 5% of my class get destroyed.

Eventually in the summer going into my Junior year, I was able to apply for DACA, which I knew would open many doors for me. Immediately after I received my work permit, I went to apply for my social security number. I was ready to live outside the shadows and start to speak up because I had something to protect ME!!!

When receiving my Social security number, I went to one of the few places in Alabama where you are allowed to get your license or permit. After that, I felt like I was finally starting to live the American dream.

Senior year was starting and I was so overwhelmed with college applications because I am a first generation in my family to attend college. I couldn’t ask my parents for help because they were more clueless than I was, so it was up to me to find out what I needed to do. Thanks to some of my friends and teachers who guided me through college applications, I was able to apply to my top 6 colleges in Alabama. I got accepted to all of them and was offered some scholarships for being in the 5% of my graduating class and being so involved in my school and community. Unfortunately, due to my status I had to reject all those scholarship.

I applied to many other scholarships in HICA and Coke-A-Cola, but I didn’t get anything. It was time to decide where I wanted to continue my education, and without hesitating I knew UAB was a perfect fit for me.

During class day, all the honor graduates had to sit in the front. I remember sitting there hoping no one would make a comment about how all the honor graduates had received scholarships but one, me! As I was getting up to leave and I did hear many comments such as “Wow, isn’t Caren smart? I guess not because she didn’t receive any scholarships.” At this point I was done, I turned around and said “If you were in my shoes you wouldn’t be saying that. And by the way I did receive scholarships but did not receive them for personal reasons.”

At Graduation, I was filled with joy to walk across the stage being a honor grad with a 4.0 GPA, 8 cords, and a metal to receive my advance diploma.

At the time, my family had already been saving for some of my college expenses. My dad was working as a carpenter, and my mom was cleaning houses making it possible to attend my dream school.

During the end of summer before my Freshman year in college I decided that I needed to work and help my parents pay for some of it, so I applied to many places. O’Charley’s in Alabaster hired me as a hostess earning $5 an hour plus tips.

At this time, I had already started school. I was working an average of 25 hours a week and taking 16 credit hours, as well as commuting for sometimes an hour and a half every day to come to campus because I couldn’t afford living in the dorms.

Without DACA, none of this could have been possible. DACA has helped me with finding a job to help my parents pay for tuition, it has helped me with obtaining a driver’s license, and most importantly it has helped me continue my education. I encourage everyone to support DACA and help the thousands of people like me who are in same situation so we can strive to be the best we can!